May has come and gone and boy was it a rewarding, frustrating, trying, exciting month. Also, gonna go ahead and toot my own horn here because it’s THREE days into June and I’m already making a blog post! HEY! ;) We are making good headway on Stella; we are a bit ‘behind’ schedule in relation to the list we made and the progress we thought we would’ve made by now, but I think we will be ok. In May we thought we would’ve gotten the fans, windows, and interior skins back in .. and in reality we just barely got the body permanently attached before the month was over – something we thought we would’ve accomplished in April. But alas, all is well. We will be ready come hell or high water for our maiden voyage in August – which is a mere 61 days away………..

— finished up the belly pan and attached the banana wraps! 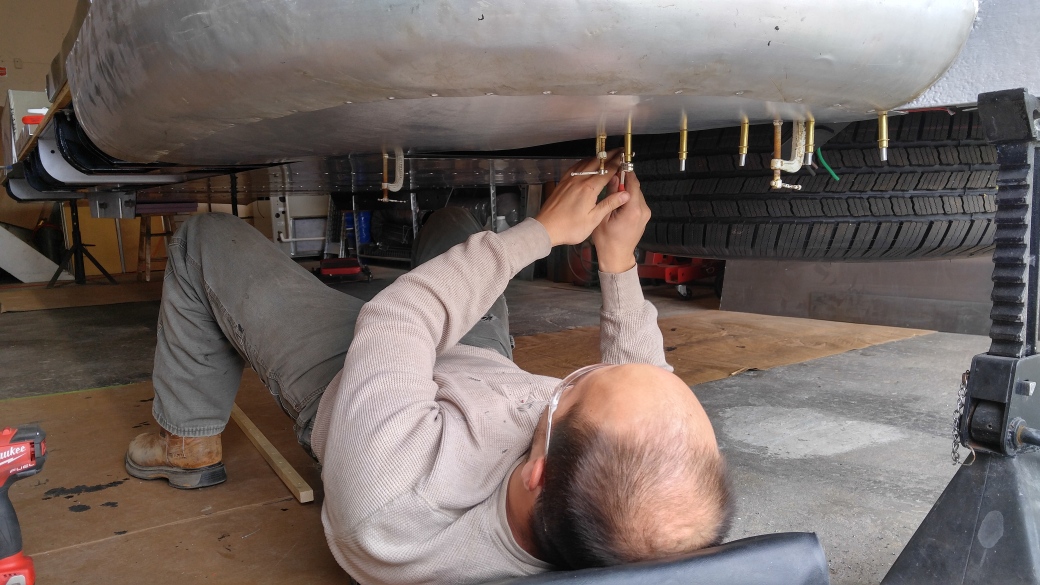 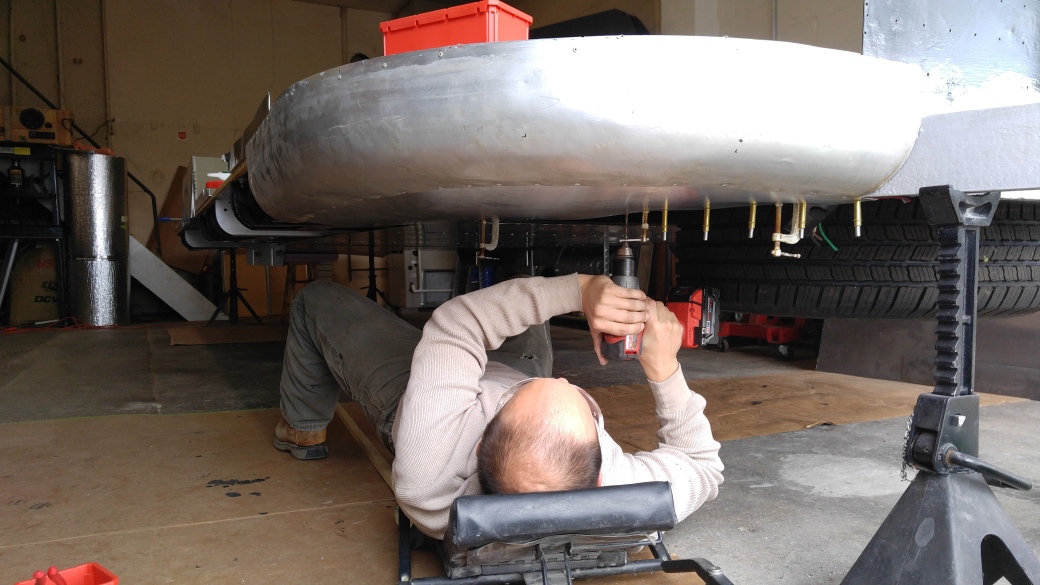 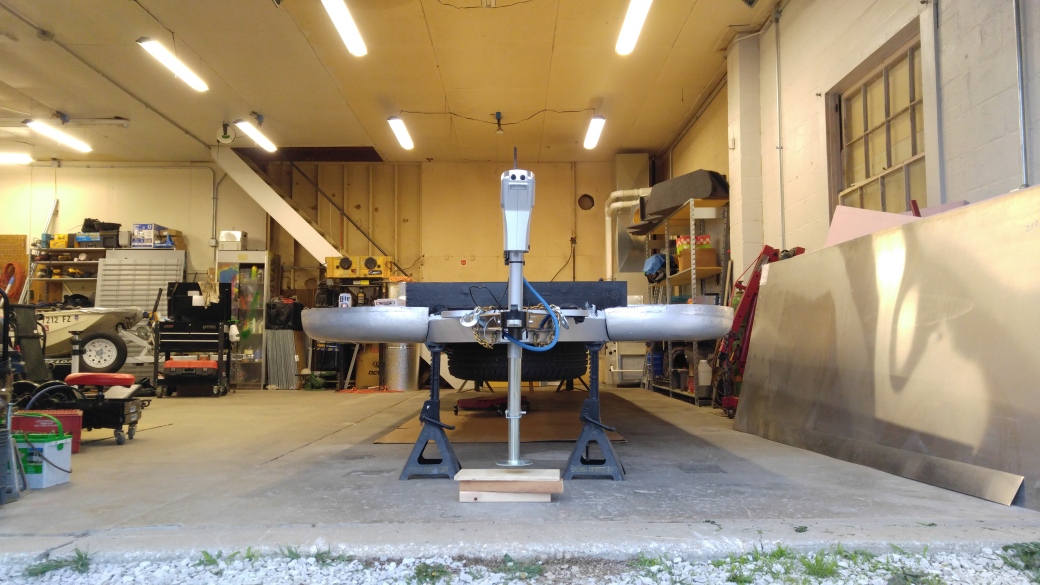 — began work on the rear curved/angled belly pan pieces and seam-sealed the wheel wells. Let me tell ya, those rear pieces were a BEAST. SO hard! We cut the aluminum extra big to give us space to cut-to-size after we’d got our final shape. We put a curve into the aluminum by rolling it over our acetylene tank. But hands down the HARDEST PART was trying to get the aluminum to curve under with the belly pan, but also angle up towards the back to attach at the c-channel. IT WOULD NOT DO WHAT WE WANTED. We used thicker aluminum than originally used on Stella so the thicker material made it hard to bend and angle the aluminum like we needed it – there was a lot of frustration, probably cussing, and stepping back and taking time away to re-assess our situation to find answers when we were less frustrated. We knew what we needed the aluminum to do, we just couldn’t figure out how to make it do it without there being an excess amount of aluminum bunching up and being ‘pointy’ in the angle changes. 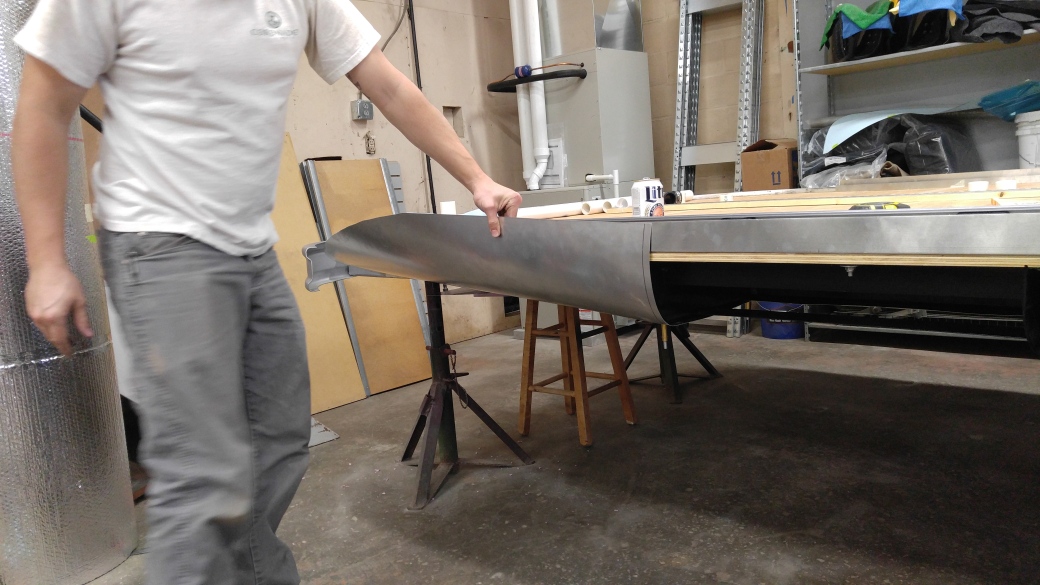 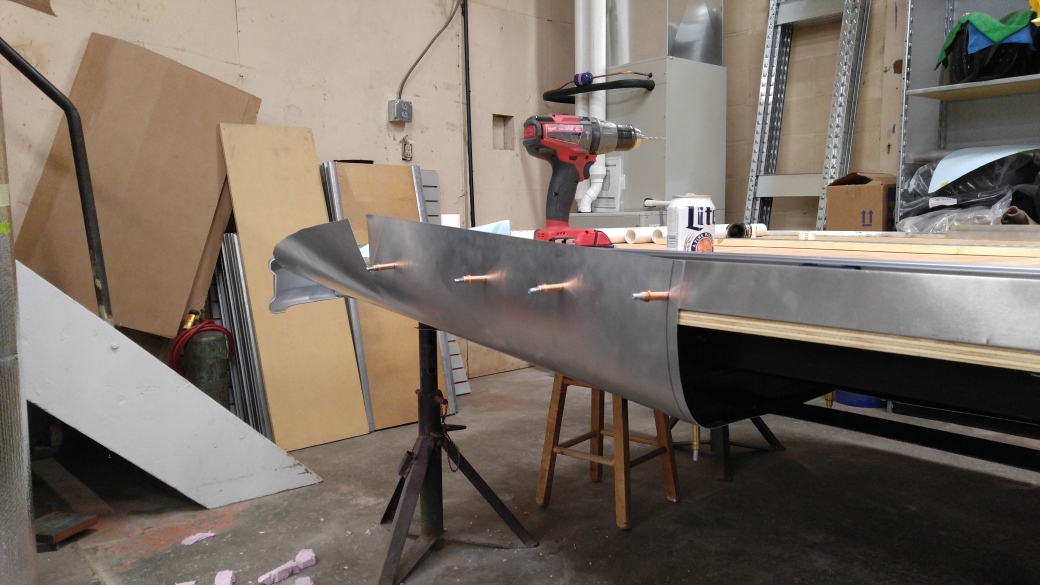 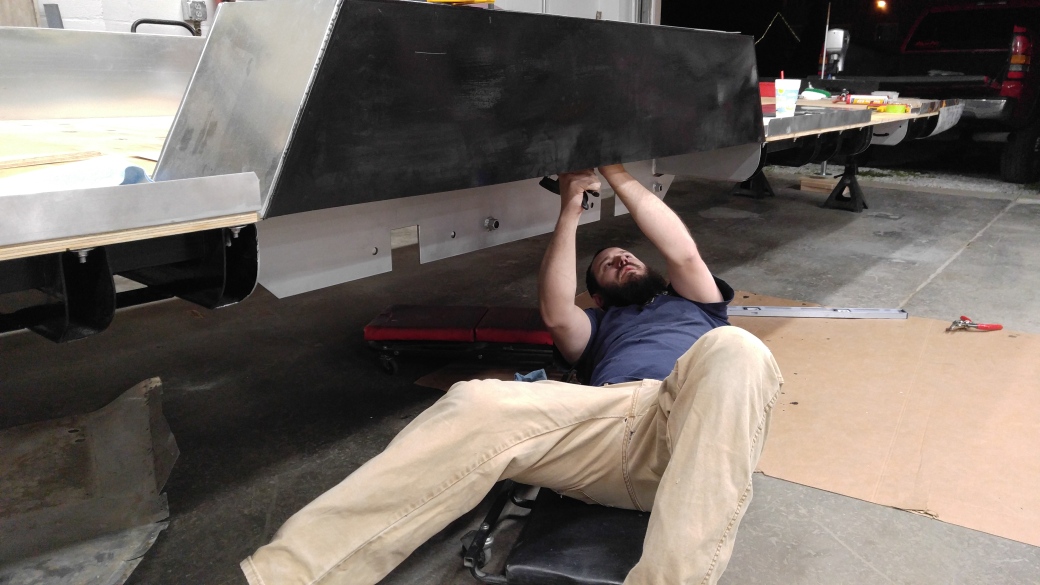 — re-evaluated our plan for the rear pieces and tried a new technique. Originally we had cut slits into the aluminum to make the curve, but when we’d fold them over on each other to make the actual curved shape it would make points where the pieces met instead of curving seamlessly. There was clearly excess aluminum but we were unsure how to remove the excess. Thanks to pictures from Vinstream on the Airstream Forums, we drilled holes at the base of where each slit met and then tapered the slits a little; this eliminated excess aluminum and gave us a better way of curving the metal without it bunching. And thanks to a little help from our niece, it’s finished. ;) It by no means is perfect and beautiful, but damnit it is DONE and we are thrilled to have tackled the issue and moved on. OOF. Plus we coated our wheel wells with undercoating to get them road ready! 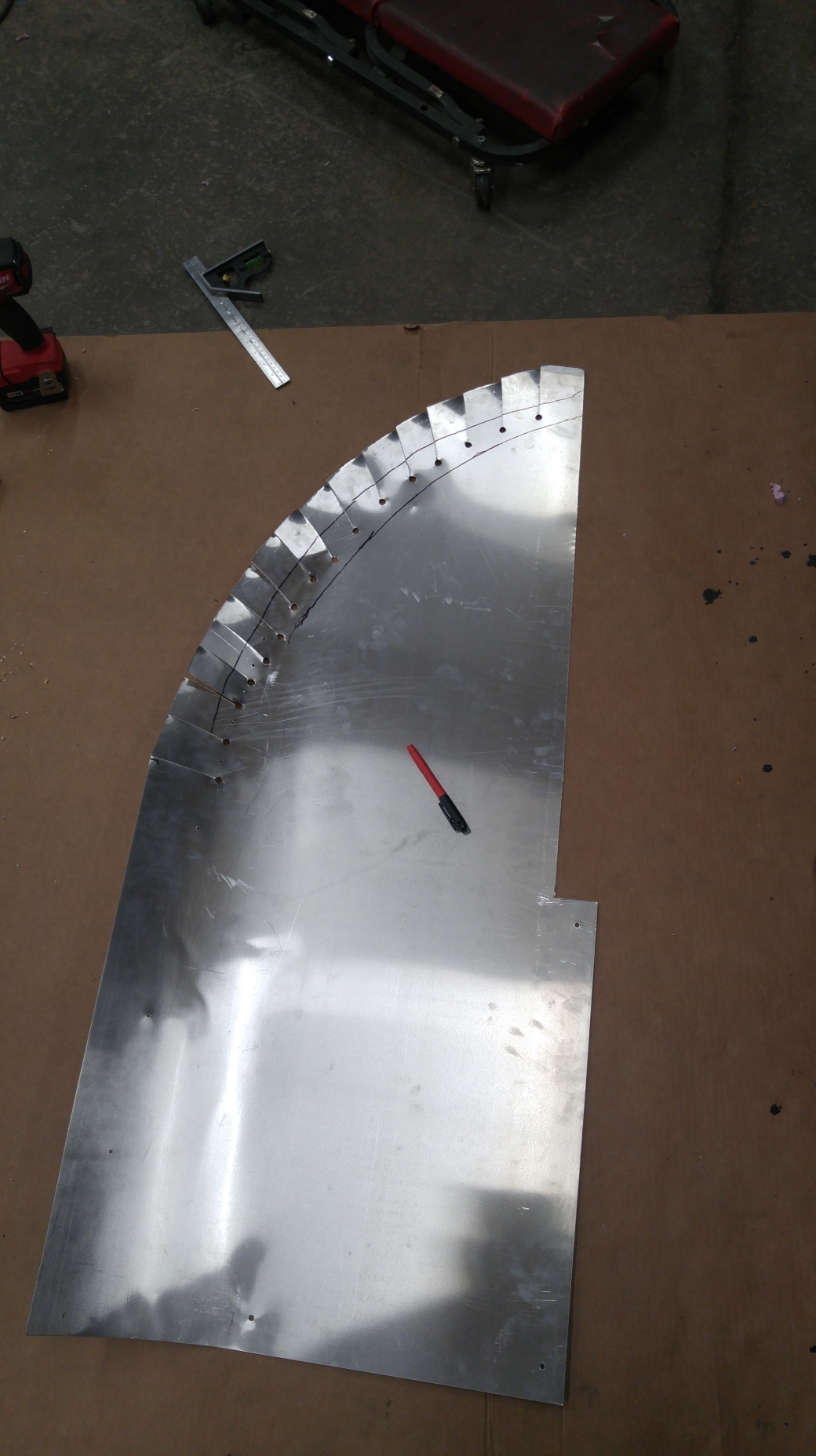 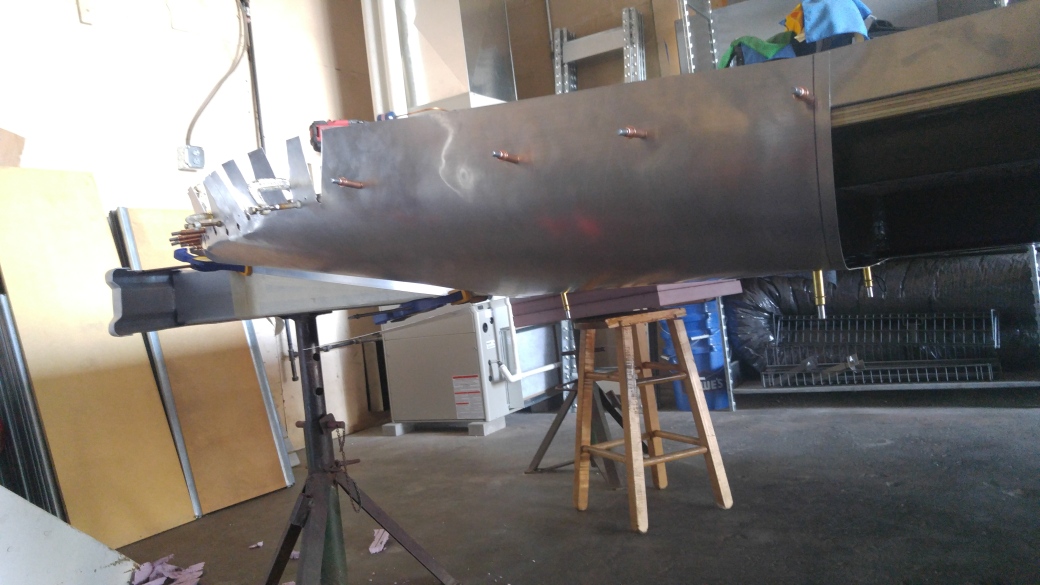 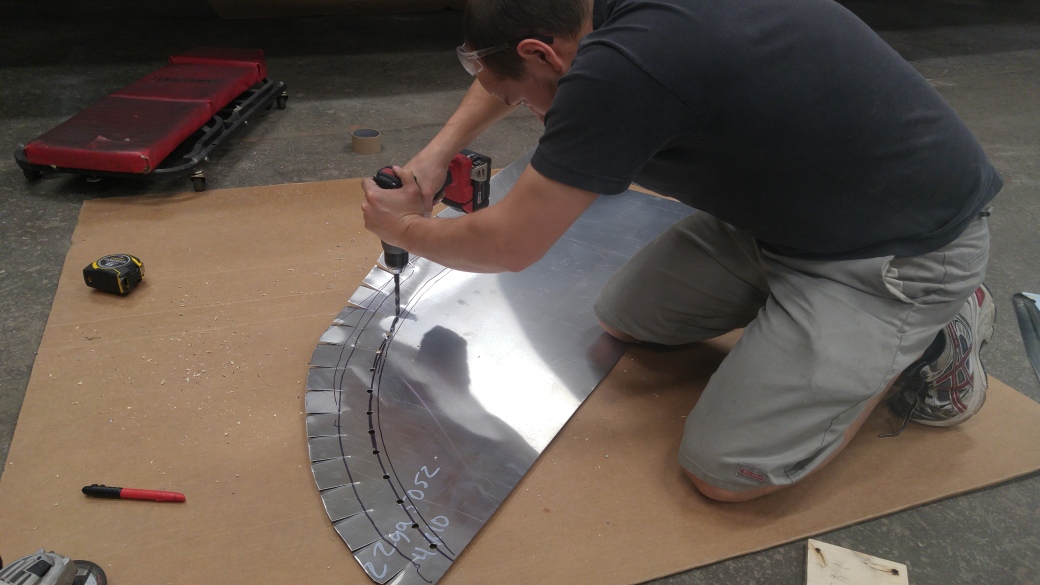 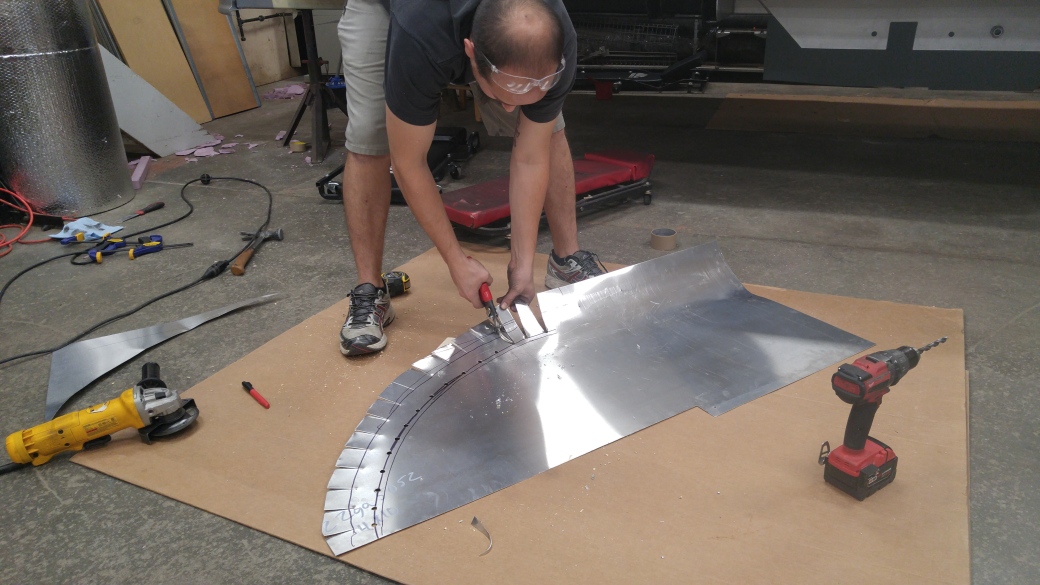 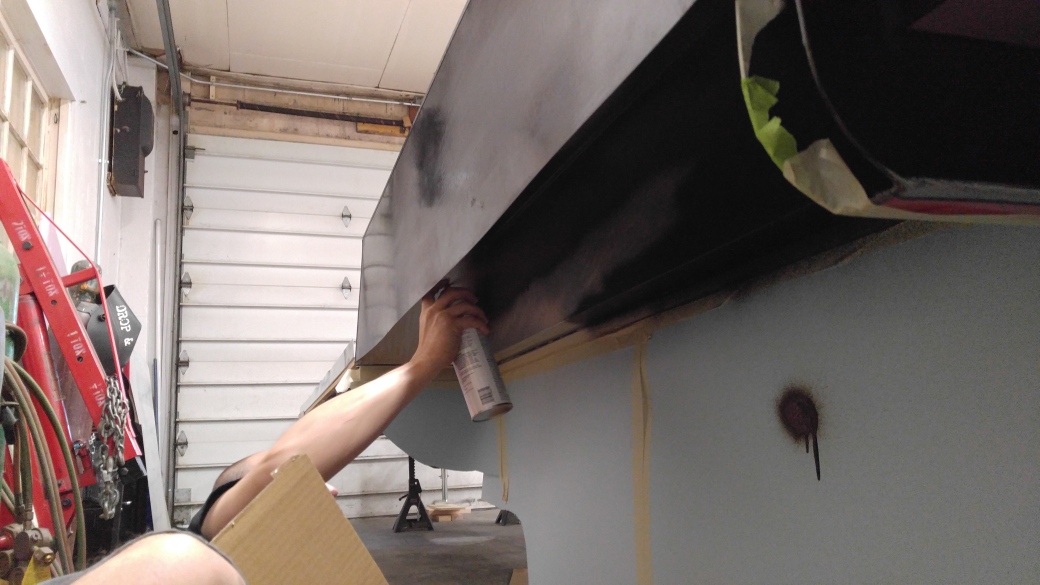 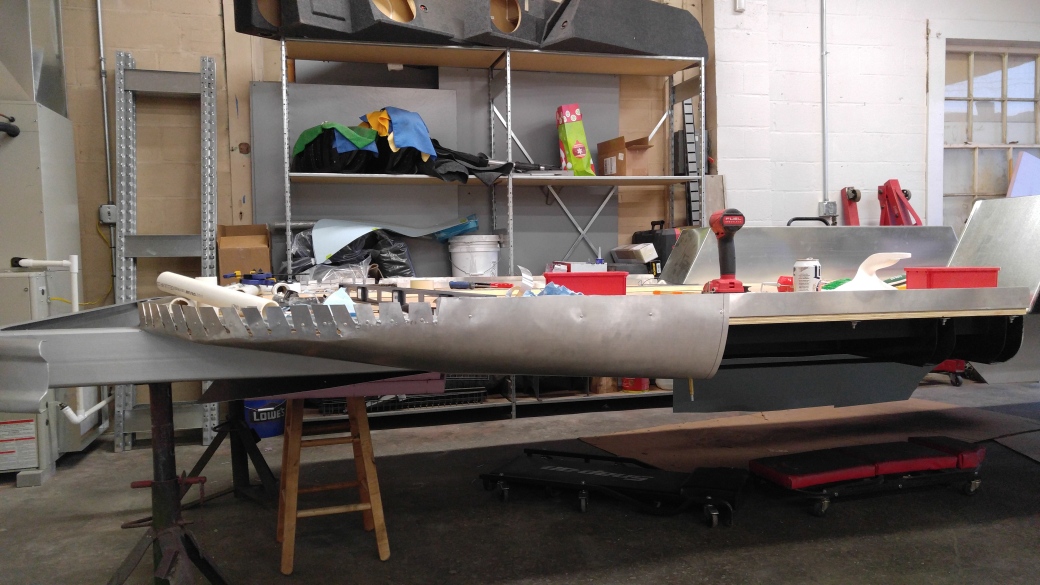 — put our axles on! and our tires on! AND NOW STELLA IS STANDING ON HER OWN 4 “FEET”!!! Casey and I tackled this job on our own and thanks to a jack and our brute force we got them secured on! It was mildly nerve wracking considering those axles are HEAVY but we managed. We made sure to seal around the belly pan where it met with the axle plate to hopefully eliminate any water from getting in. Then it was just a lot of coaxing the axles into the right position in relation to the axle plate so we could bolt everything up right. We still have to cut the wheel wells in relation to the curve of the body but that will come at a later date. For now the wheels tuck nicely under the wheel wells and we are pleased as pie that she is no longer propped up on 4 jack stands; just 4 wheels and her jack. (Also a fun factoid for you: metal shavings cling to leggings like NOBODY’S BUSINESS. Ouch.) 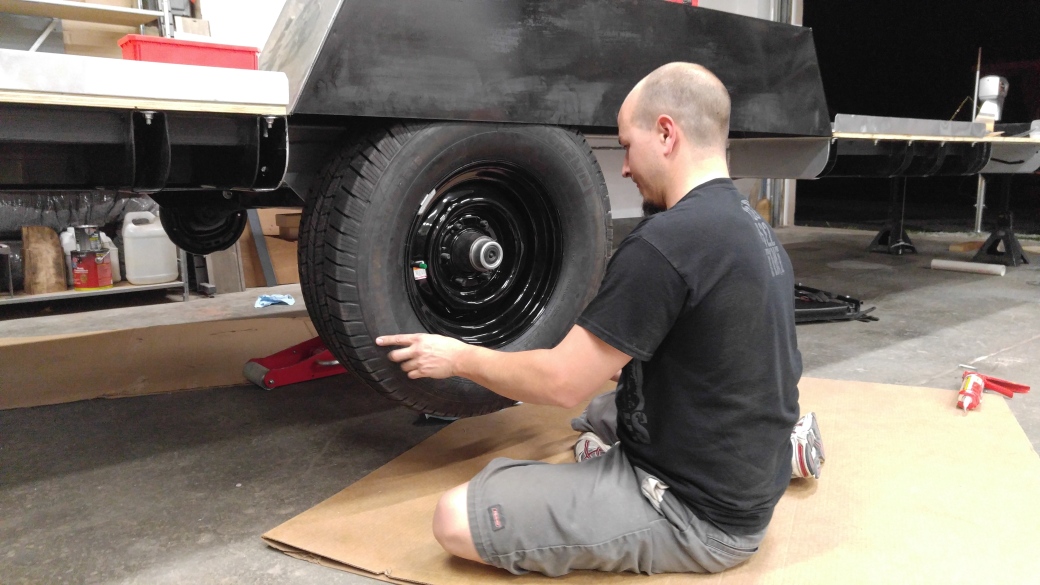 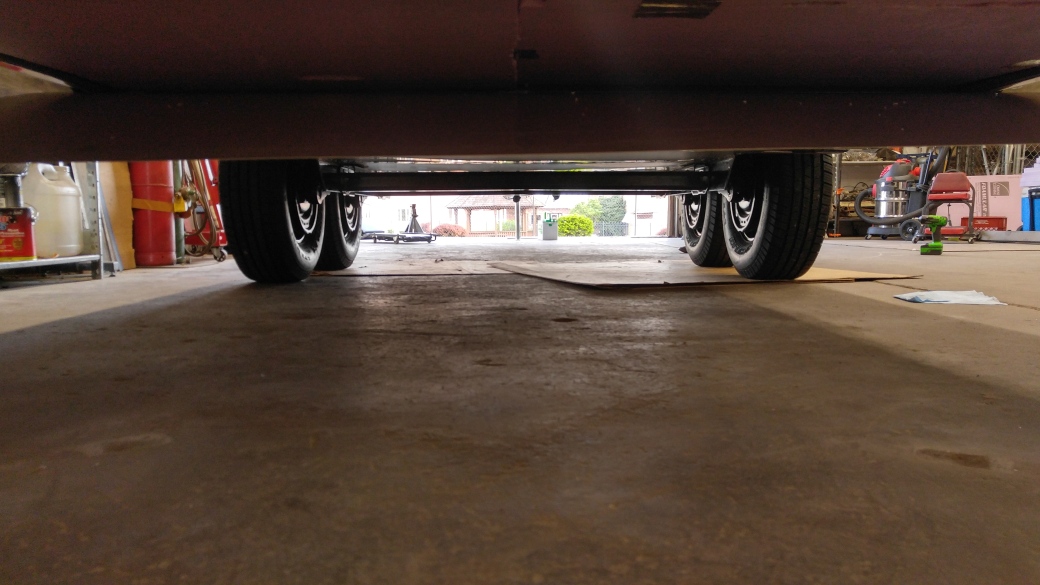 — tried our hand at polishing (with tools we had on hand; not the ones we’ll eventually be using), attached the trunk belly pan to the rear of the body, and bought Stella her own Scentsy! 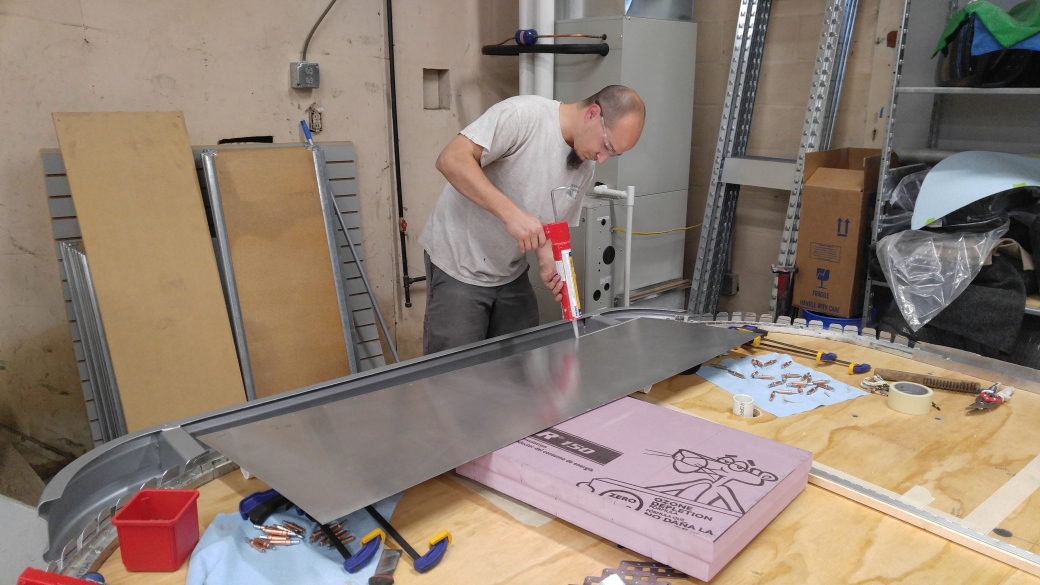 — MOVED STELLA’S FRAME BACK UNDER HER BODY!!!!!!!!!!!!!!! I felt like I was on the verge of being sick watching Stella roll out of that garage bay for the first time; what if something went wrong?! But true to Casey’s brilliance all went perfectly and she rolled like a dream. And seriously, we are forever and ever grateful and indebted to our amazing friends; not only do they let us use their building to work on Stella but they HELP ALL THE TIME with the project! If it weren’t for our SolarPro crew & our family we would be so much further behind on this project. We rolled Stella out of one garage bay and rolled her underneath the body in our shop (Casey did it PERFECTLY first time by the way) and everybody pitched in to help line the body up with the frame and bring the two parts together. And insert even more sentimentals, but believe it or not our literal-built-from-the-floor-up frame that we transferred the original tongue & curved c-channels to lines up PERFECTLY with the holes in the body that we haven’t looked at since we rolled the body out a year ago. I can’t even believe it. Literally it gives me goose bumps every time I think about it – my boyfriend is THAT good. It is such a rewarding, validating, proud feeling to know that 4+ months of building a frame and crossing our fingers hoping we did it right has paid off. In a HUGE way. 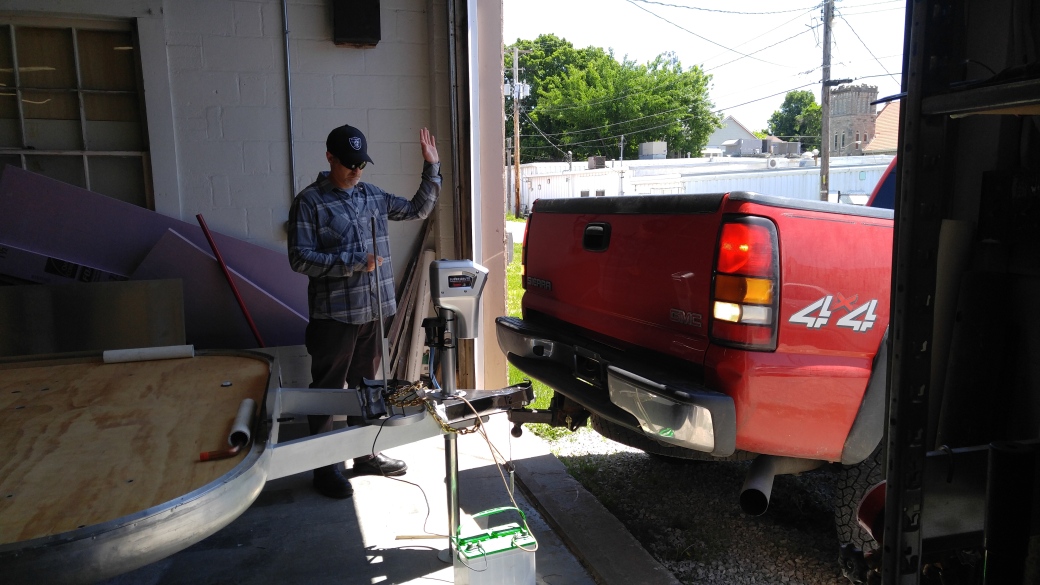 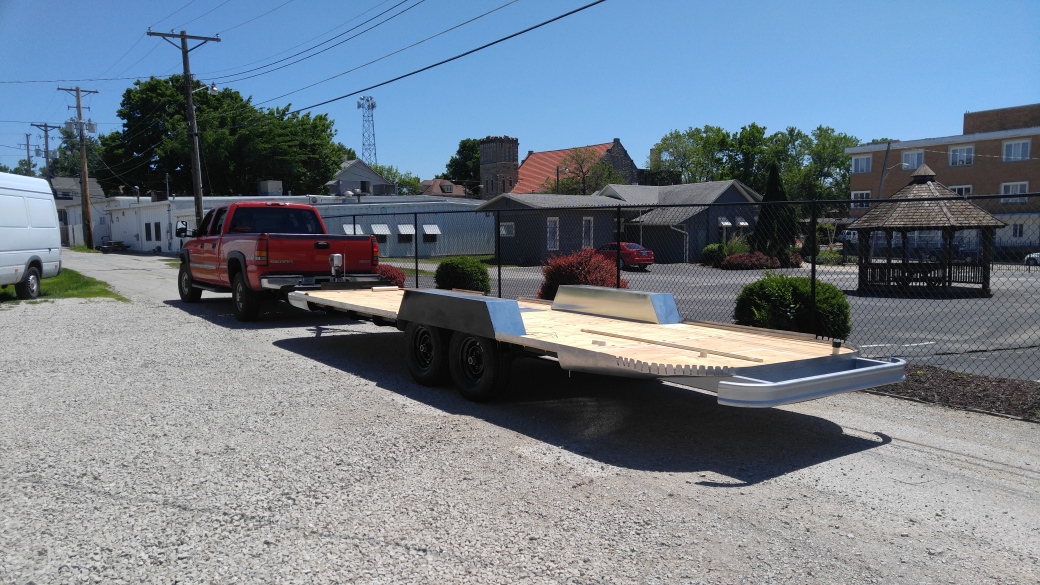 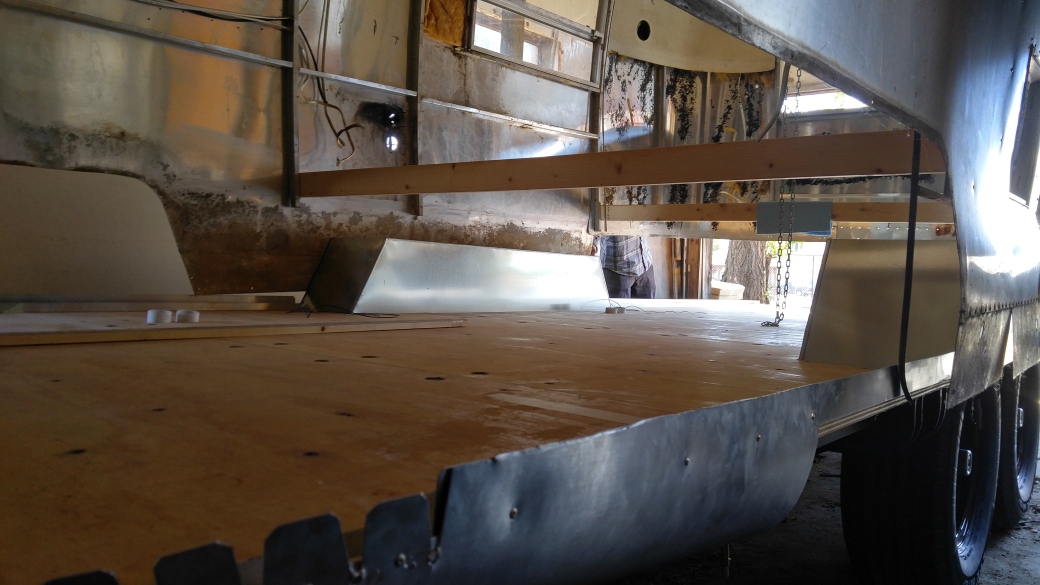 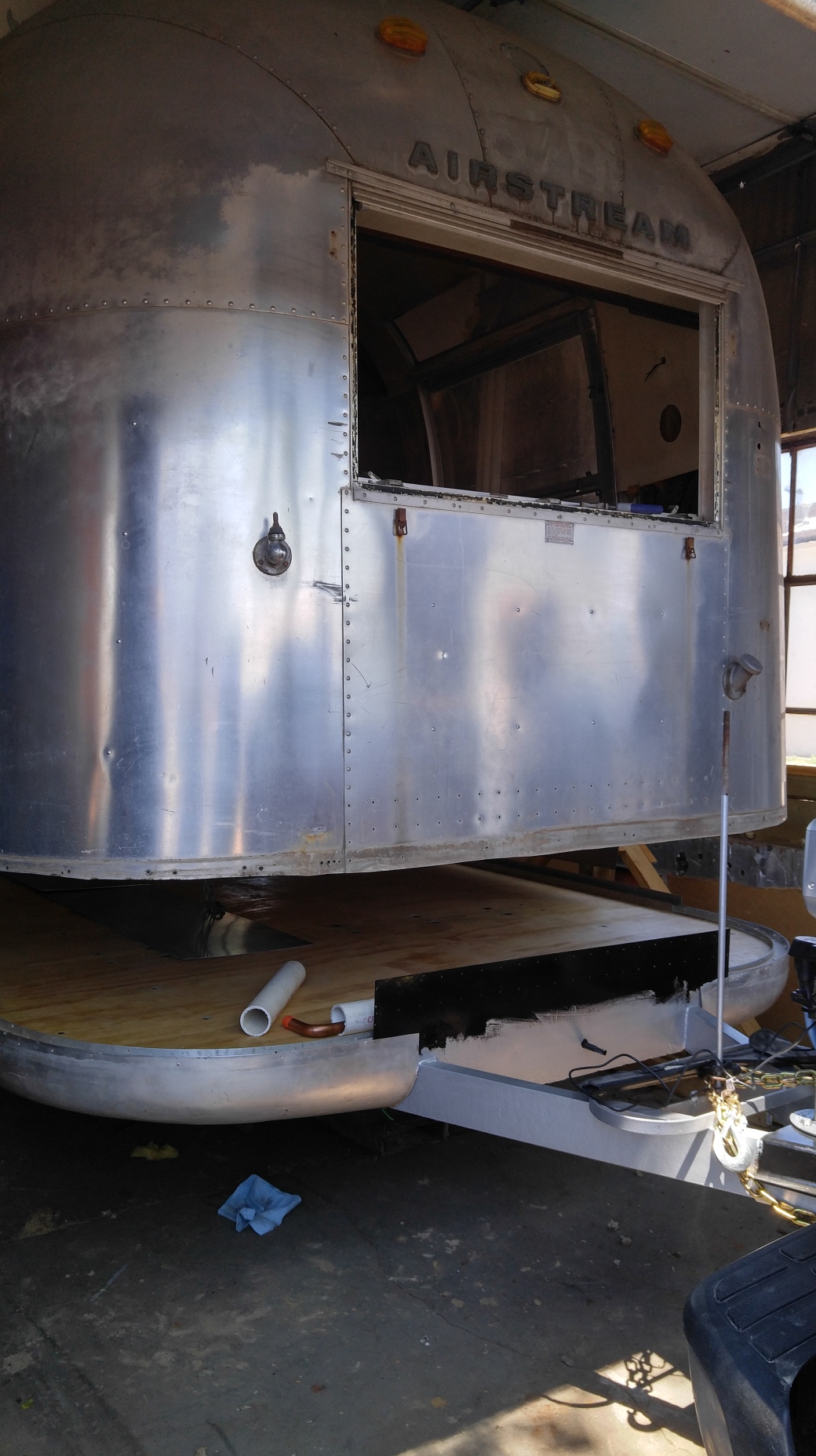 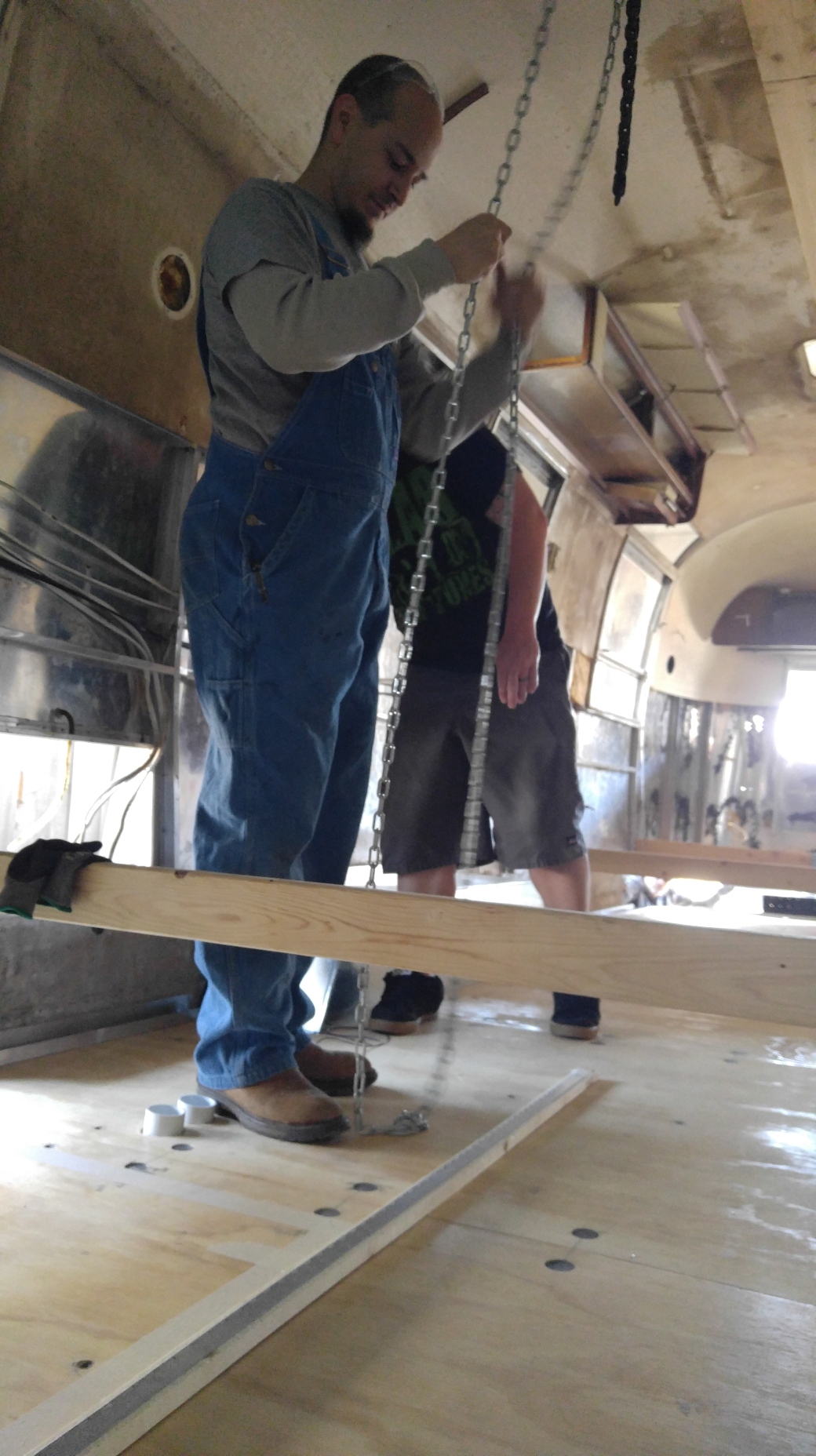 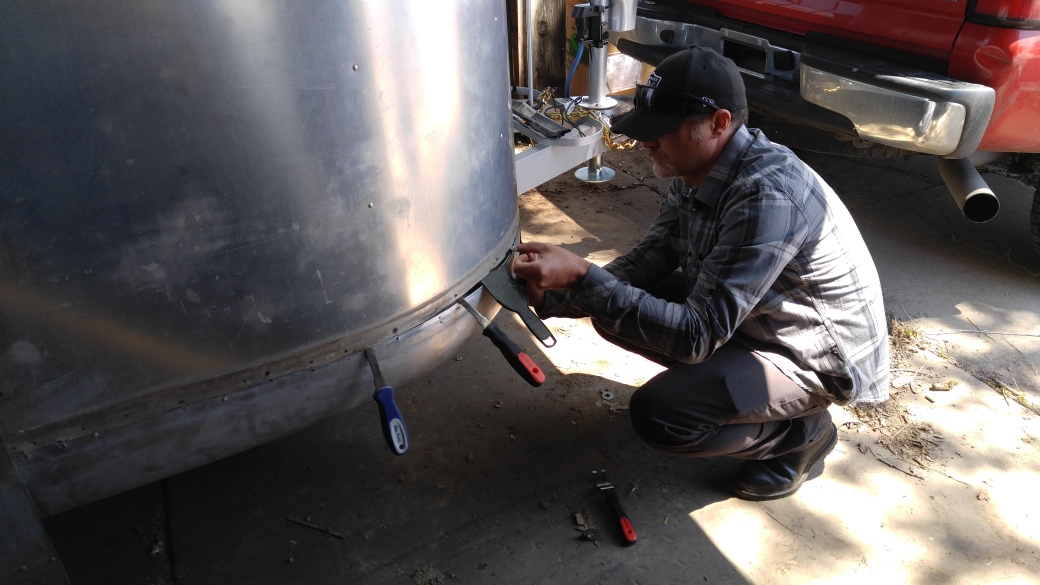 — got our steps! But that’s a troublesome issue for next month…

— re-attached the body to the frame. Truthfully – this was the second difficult part of the build that we’ve encountered. While the frame fit under the body perfectly, we could only get 3 out of the 4 corners down without struggle; the rear curbside curve always gave us issues. We could coax it down with a LOT of help, but we weren’t sure if that was normal or if the amount of effort we had to put behind it meant that the rear was too wide. We certainly didn’t want to force the body on only for it to mess up the body so we backed off. Plus some of our ribs were either too long or would hit the bolts we added to affix the c-channel to the floor so we had to trim them up a little. But then the body would bottom out underneath the door and we were unsure if that was supposed to be trimmed up or not. And being that we have never done this before, we were sort of at a loss for answers. And I freaked a little. So Casey put in a call to Colin Hyde and as always he reassured us that we were doing a fine job; that it isn’t unusual to have to coax the body into place. That it helps to put physical pressure down on the windows and other applicable openings to force the body down (without jarring the body up of course), and if that doesn’t work, we could even go so far as to put ratchet straps through the windows and tighten her into place. Plus to make sure we trimmed up all the ribs to prevent them from bottoming out, and to trim the subfloor underneath the door jamb to enable the body to sit snug against the floor. He also told us that he doesn’t seal between the body & the frame; something we were dreading because if it was that hard to get the body on without the sealant, imagine how much messier & difficult it would be to test fit, re-lift the body off, apply sealant and then attempt to coax the body on with the goo! Hard pass!!! So with Colin’s sound advice, we ventured down to the shop and did just as he told us; we trimmed and shoved and wiggled and shifted until everything sat perfectly. We started by lining up the body with the hold-down plate we transferred from the old frame to the new frame and just worked our way around until she was good and tight on the frame. And by golly once she was sitting pretty we immediately started drilling holes to put those clecos in because we did not want to do that again! 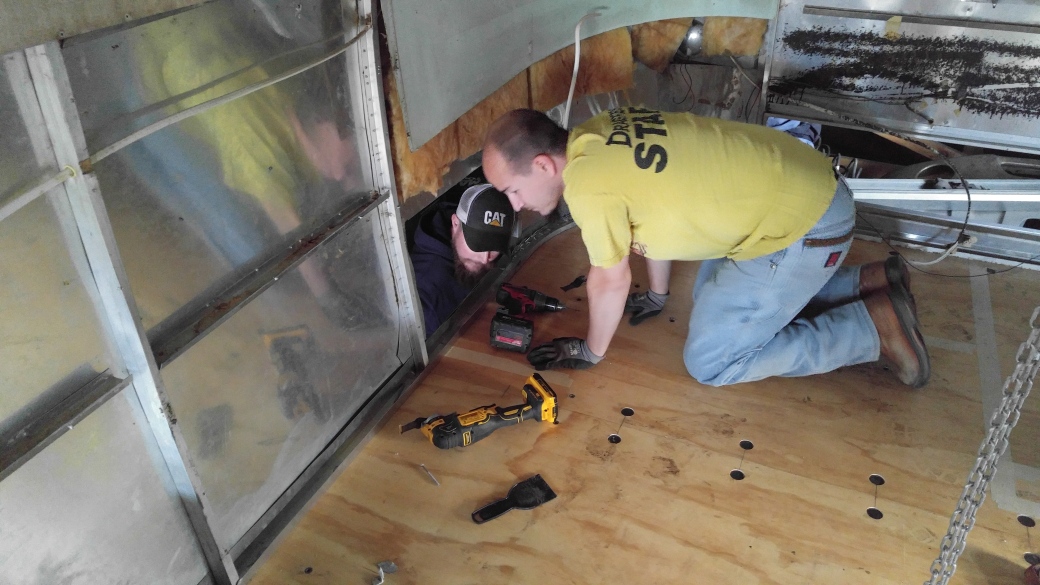 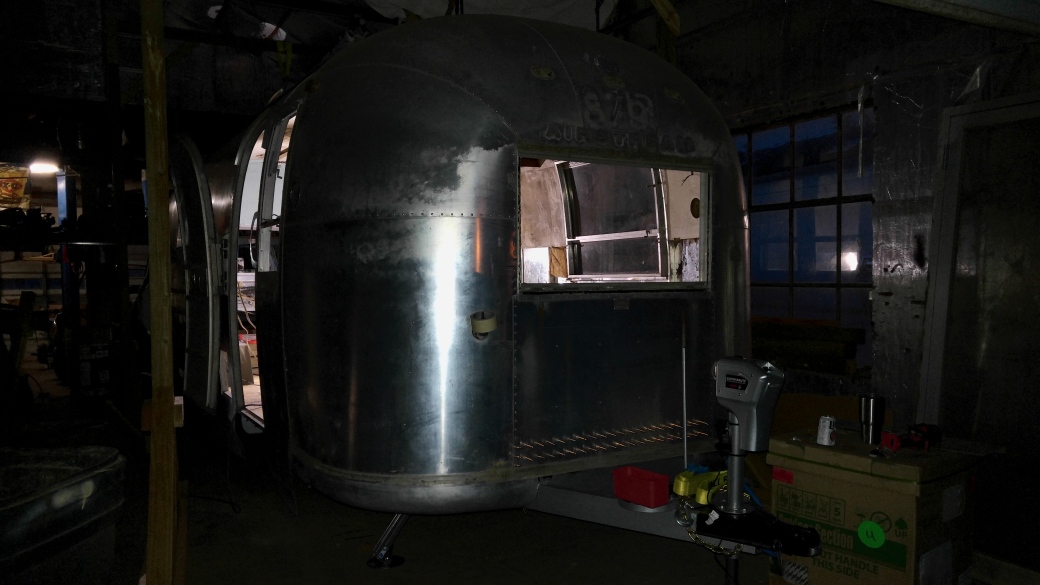 — riveted that body into place to make Stella all one piece again! I was the Bucky to Casey’s Rosie and together we got probably 92% of the body’s buck rivets in on the first night. We had to bring other bucking bars down the next night to get in a few tricky areas but we got everything attached lickity split!! Stella is back together!! **INSERT ALL THE HAPPY EMOJIS** 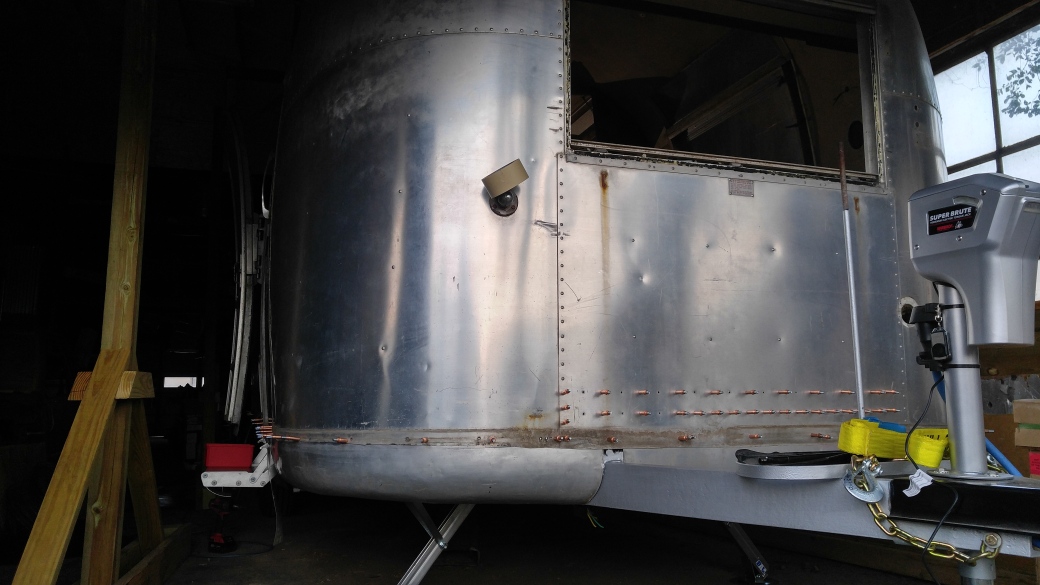 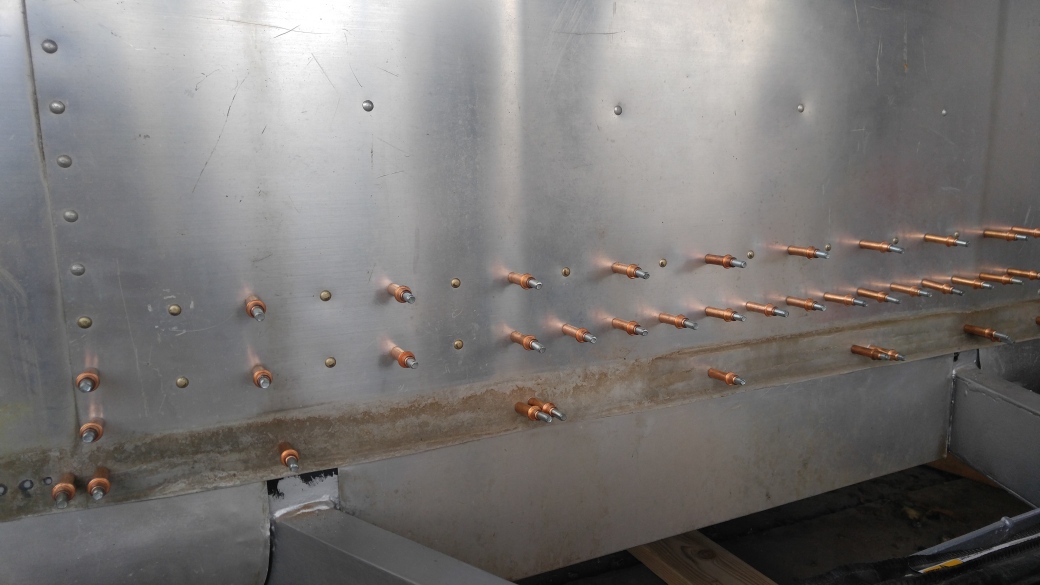 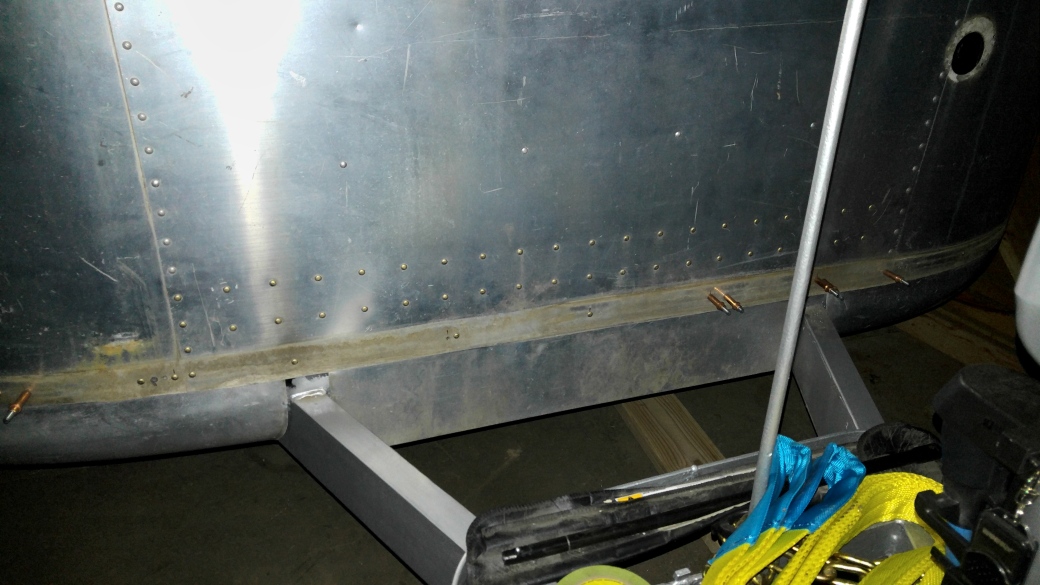 And just like that, May is over! It was a month full of huge steps forward and our first few really frustrating situations but we are happy to have made it as far as we have. We are ready to roll Stella back over to the other shop (it’s more climate controlled, plus our friends are over theres) and get started on phase two of the renovation. I think this will be the hard part in relation to what we have been doing; everything up until this point has been building all new — now we have to work with what we have. Remove everything, (the inside walls, the insulation, the old wire) clean everything, and begin putting everything back together. But while it will possibly be harder, I think it will go quick and it will be just as immediately rewarding and satisfying as the first half of the project and we can’t wait to dive right into it! Here’s to huge progress (and some late nights!) in June.

One thought on “Baby got BODY!”