Full disclosure: we are not basketball fans. But March was a crazy month! So it fits. ;)  Also, I apologize for being over a week late with March’s blog post .. we have had some family issues to attend to at home which has made for a so-far slow April and a late post on the blog. Sorry about that! But here I am, 10 days late and a lot of dollars short, ready to update you on March!!

— cut the ACX plywood we bought for the subfloor to the curve and size we need! However after comparing our cut plywood to the ply from the original frame and double-checking the width of the body, plus conferring wth our most valued resources, we chose to trim a quarter inch of subfloor off from each side; we’re hoping we made the right amount of adjustments. Thank goodness for the Airstream forums & Colin Hyde! He’s a really great guy and we are forever grateful for his kindness in helping along the way when we hit a roadblock.

And as a side note: Probably one of the most frustrating parts of re-doing (restoring? renovating? I don’t know the right word) a vintage Airstream is there are no blueprints; there are no definite specs to go off of. Sure we can compare to what we started with, but when it’s all rotten and falling apart we end up guessing and crossing our fingers more than we like…… but that’s the fun, right?! It just can get really stressful and lead to many a sleepless nights for Case trying to make sure we are doing this right the first time. But even with the stresses, we loooove it. 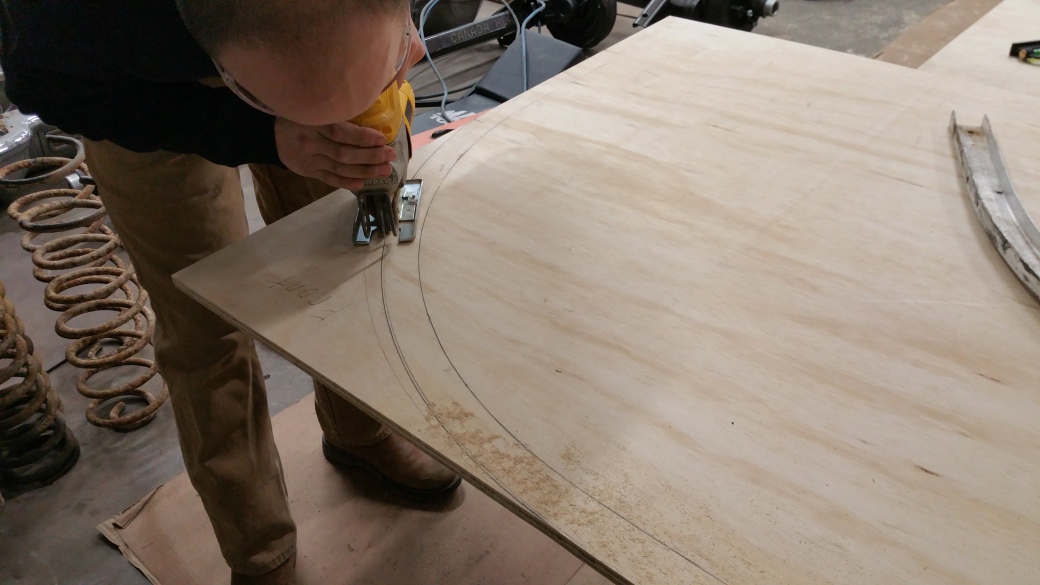 — I went out of town with my sister for a weekend but while I was gone the boys put down a 2-part epoxy on the subfloor to seal it and hopefully prevent any kind of rot in the future! Also our gray tanks came in from Vintage Trailer Supply and they’re exactly as Casey had planned in his head.

— after the epoxy we laid the subfloor down on the frame, spent forever lining it up perfectly so the body wouldn’t be crooked once we got it back on, and started marking our drill holes. Casey even started DRILLING some holes! WHA! Our friend Jeff fabricated one of our wheel wells and it looks perfect! It’s crazy how much different a little plywood makes the frame look. It’s like we took 100 steps forward in a weekend. 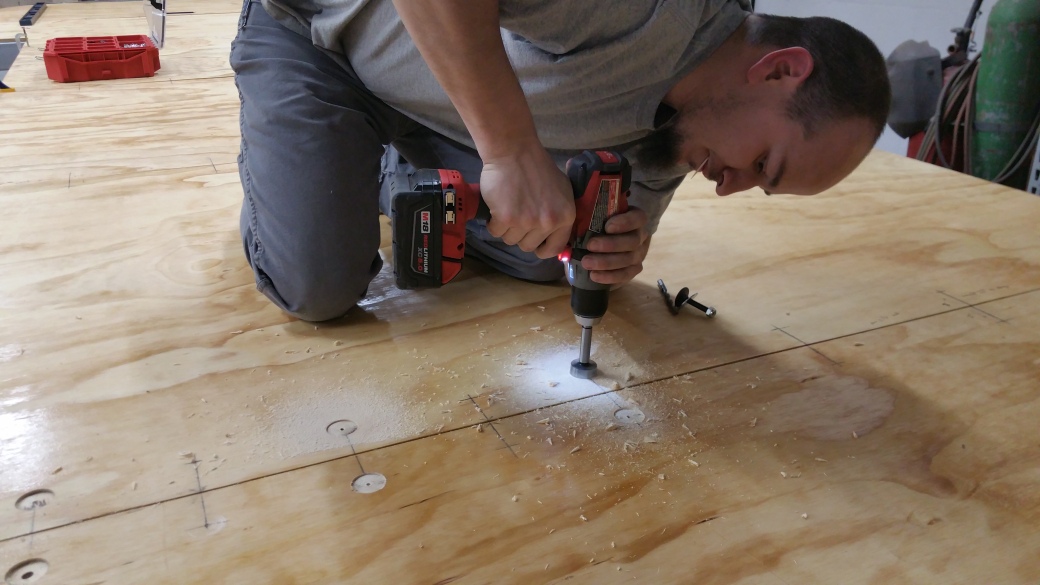 — our second wheel well is finished, more holes are drilled (including the ones for the curved c-channels!!), a couple screws are in, and we started working on the strapping we are installing to help hold the gray tanks up. We used 2.5 inch steel sheeting painted with POR-15. 2 straps for each gray tank plus corner pieces to help keep the corners stable. We are insulating the gray tanks with reflectix and styrofoam insulation, plus we have a thin piece of plywood underneath the tanks to help keep everything secure.

Another side note: originally we had planned to flip the frame once we got to this part so that it would be ‘easier’ to put the tanks in, plumb, and attach the belly pan … but we have since opted to not flip the frame this time. There are pros and cons to both, but for our situation this time around we chose to leave everything as-is. We just don’t have the right set-up to take down the gantrys from around the body, reassemble the gantrys over the frame to flip, then re-take the gantrys down to reassemble them over the body. It just all sounded like too much of a gamble and ultimately we were more comfortable not putting our body in jeopardy like that. 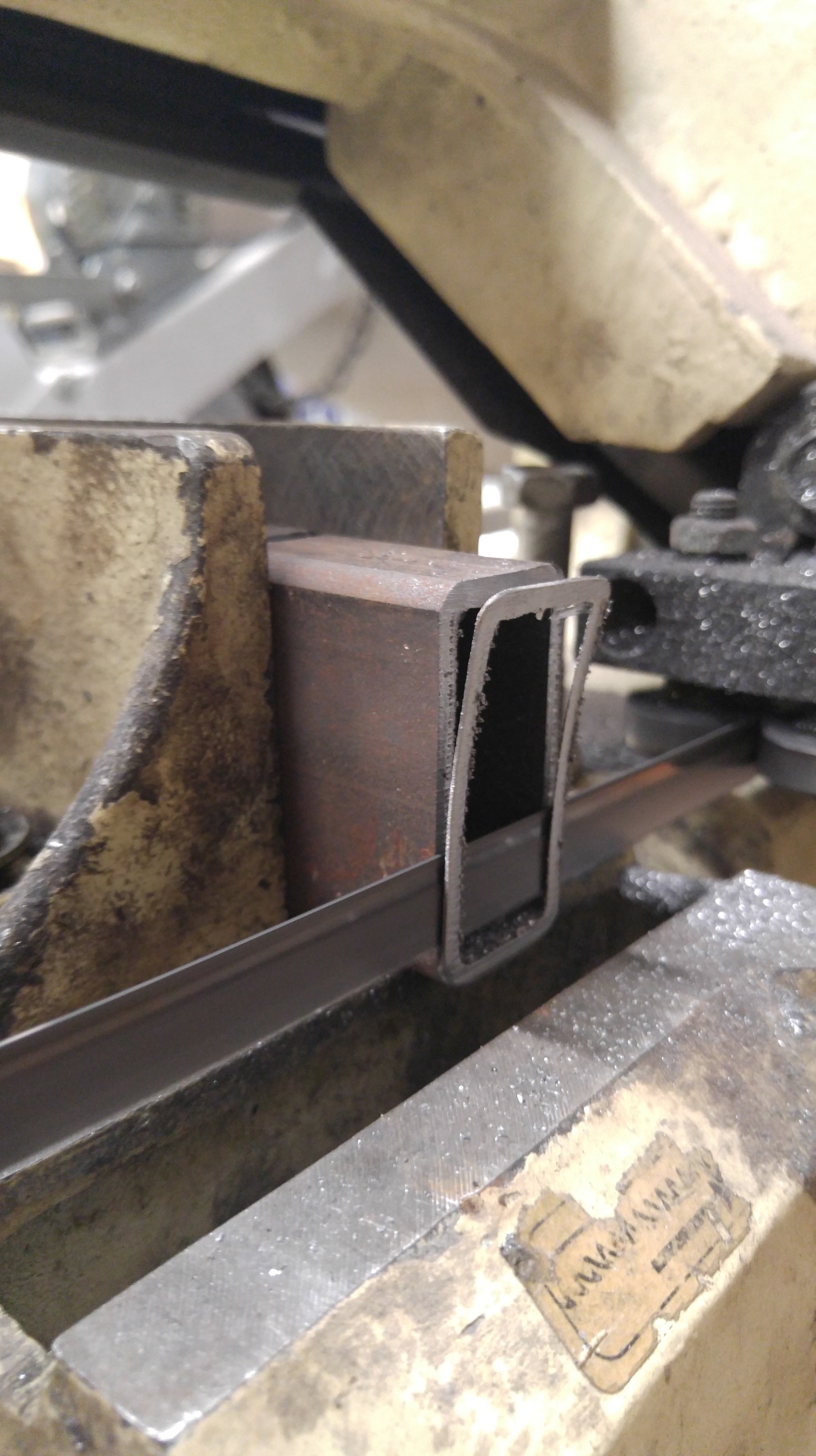 — we started cutting aluminum to cover the spaces where the spare tire carrier and the step will be since those areas won’t have the belly pan up against the frame. We also discovered the spare tire carrier we had originally planned to use caused the tire to hang too low to the ground so we ordered one from a different type of vehicle; one that holds the tire closer to the frame. 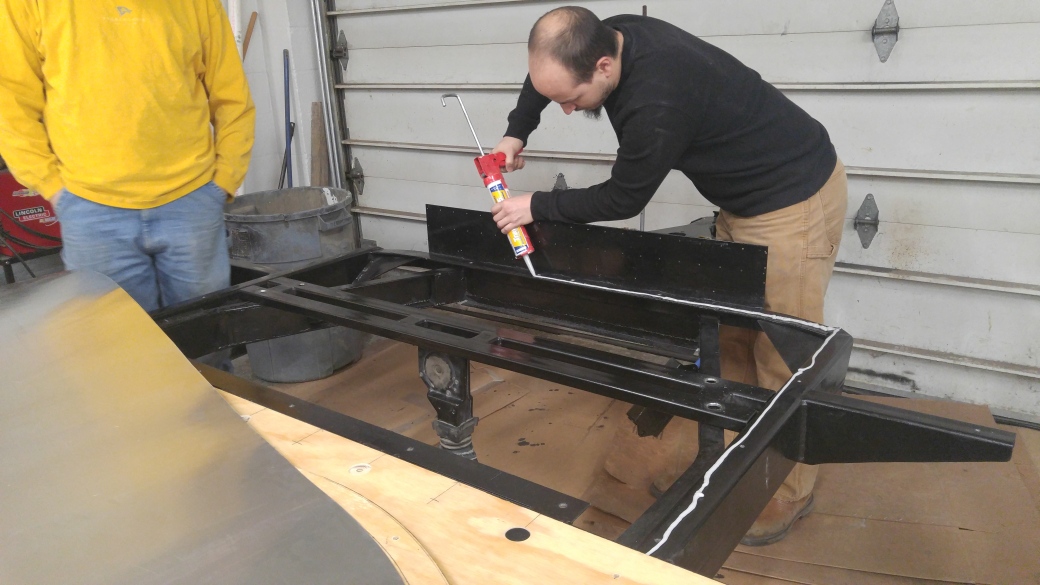 — we started drilling holes and screwing in screws!! HUGE STEP! Our wheel wells are screwed into place, biscuits are in action, and the subfloor is becoming permanent!!!!!! YAY!!  Also, Casey went to the HVAC shop where he used to work to bend up some aluminum for our c-channels. They look so new and fancy! 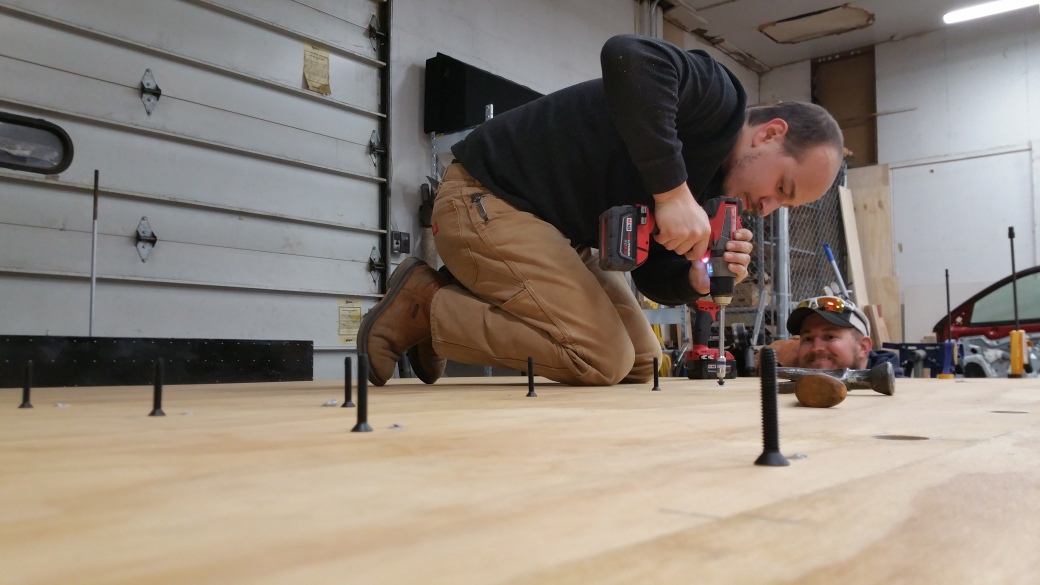 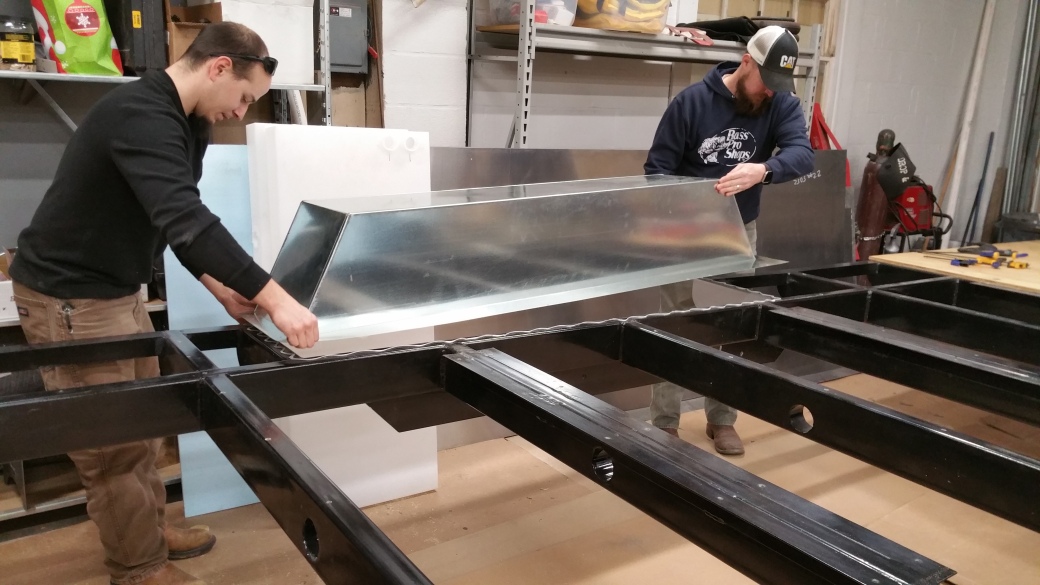 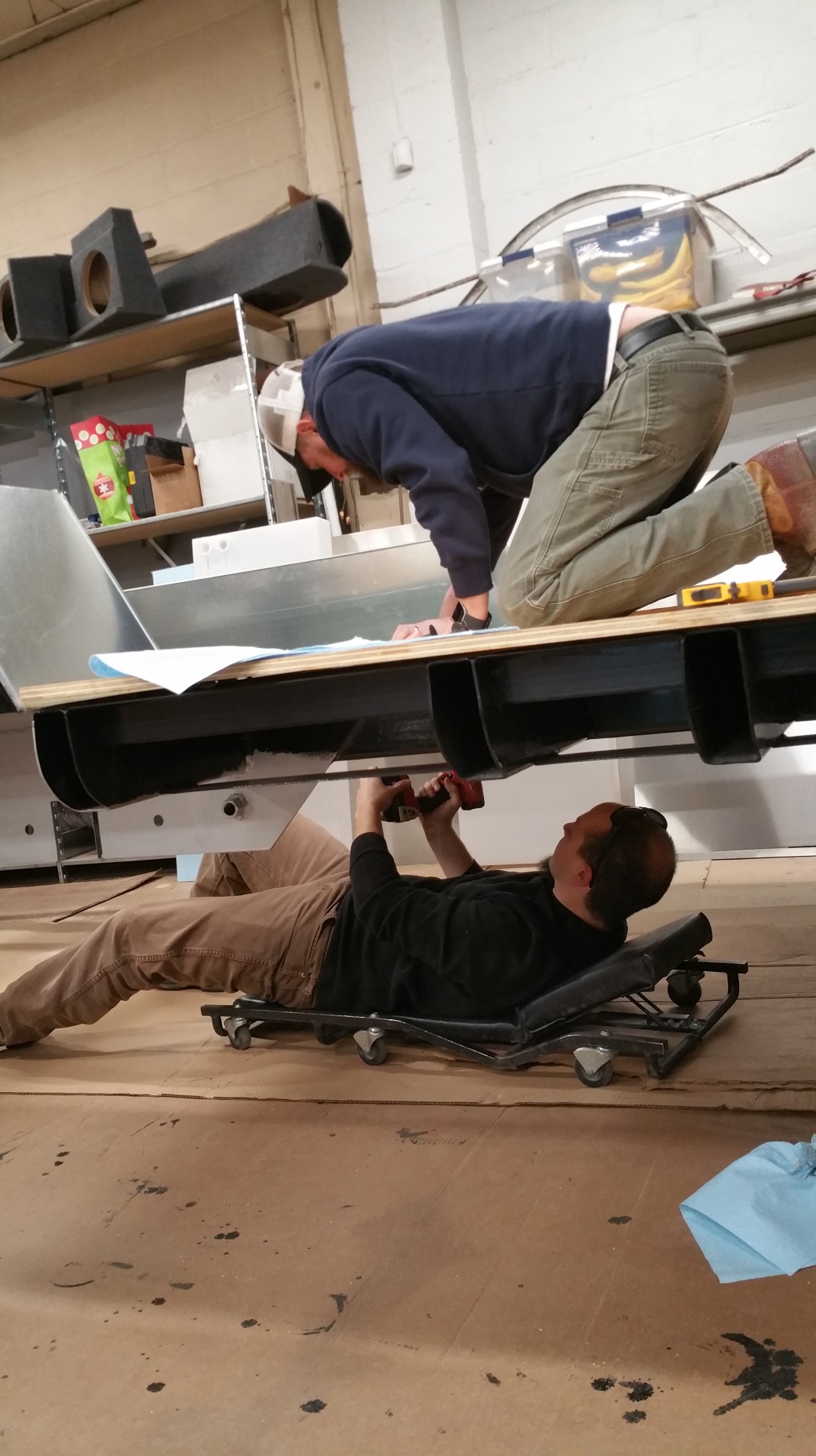 — our new spare tire carrier arrived and it works as perfectly as we’d hoped. 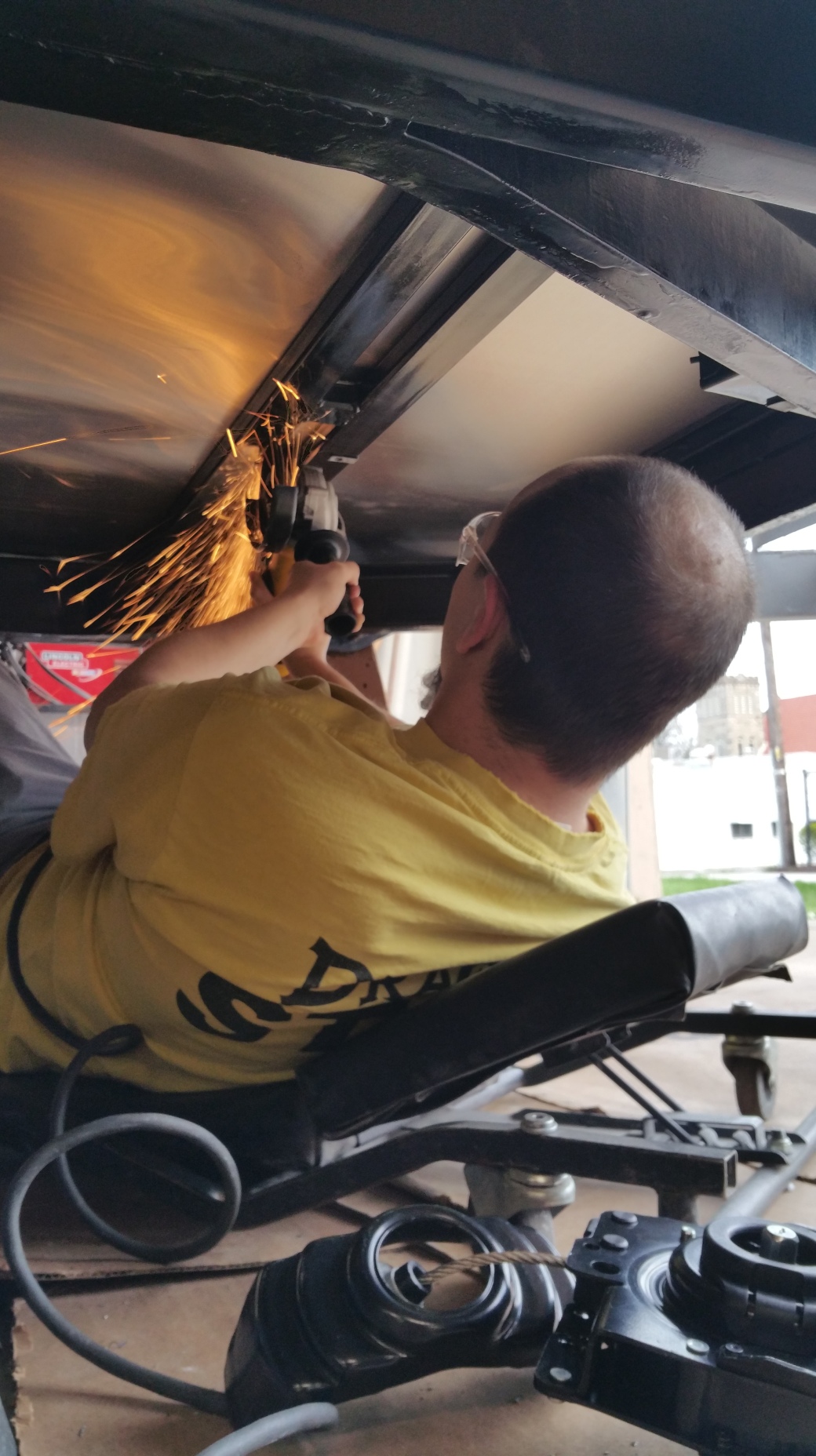 — we ended the month by finishing up with bolting the subfloor down, putting down all the c-channels, and working on test fitting our gray tanks. We also got the insulation we needed for the bottom of the frame but didn’t get to putting it in yet. After a very professionally counted tally, we average about 169 bolts to hold our subfloor down. (!!!) It felt like it took forever to get the whole thing bolted down because we kept running out of supplies! But dang it looks good, feels nice & solid, and that means we are SO SO close to belly-pan time! 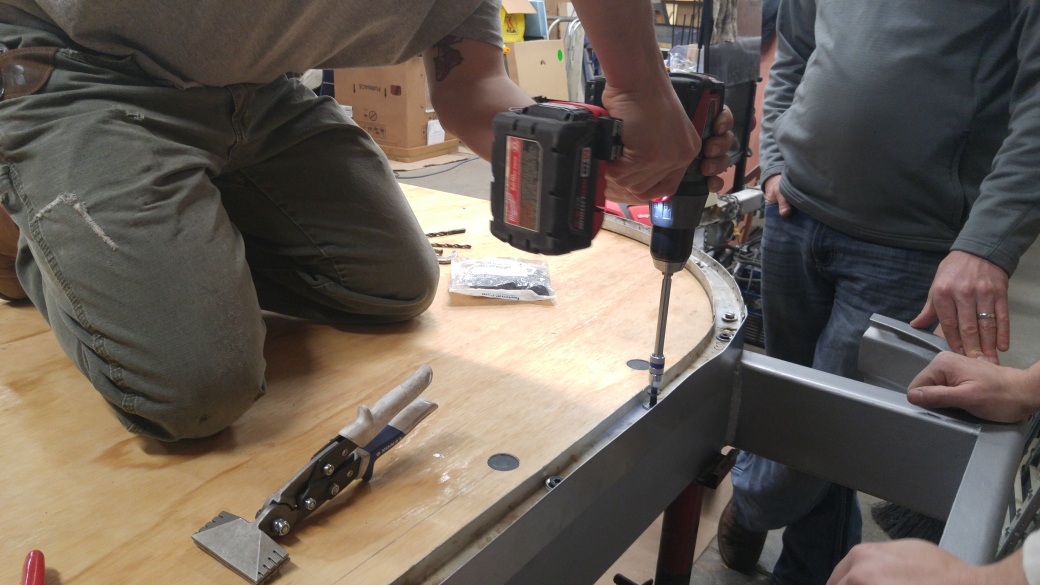 We got a lot done in March. It wasn’t as much as we’d guesstimated we’d get done this month, but that’s okay; we are still very much on schedule. Here’s hoping we get to the belly pan sooner than later!!!