While at work on an ordinary Friday afternoon, I got a phone call from Casey around 2:30 pm.

“Whaaaaaat! Are you serious?!”

Less than 2 hours later we were on the road, headed to southern Missouri. About 10 minutes away from seeing the Airstream for the first time, we saw a shooting star soar across the sky, leading us right to her. It was fate smacking us in the face.

Casey & I have talked about getting an Airstream and going tiny for quite a while. It’s been a dream of ours, but just that: a dream. A dream we thought we’d fulfill one day, but one day in the far future. We’re still undecided on a few things; Casey would love to live in an Airstream full-time right now. I would love to live in an Airstream full-time a little later in life [circa: retirement]. But the both of us want an Airstream regardless for traveling, adventures, and exploring, so many times over we have talked about owning one, oogled at every single Airstream we have ever driven by, and endlessly looked up restoring one online. We have gotten pretty dang good at spotting Airstreams any & everywhere we go, and we knew that one day we would be the proud owners of our very own Dream Stream.

As soon as we saw her, we fell in love. The ad on Craigslist had mentioned that it would be a fixer upper and we knew it would be a lot of work to restore her, but we have wanted an Airstream for so long that it was a no brainer to take her home. Plus the price was so good, it was practically highway robbery. The stars aligned for us and Stella the Dream Stream was born. Getting her home was 97% trouble free – with the exception of that one blown out tire we had within 5 miles of picking her up. Thank goodness for spare tires! But other than that, it was a smooth sailing 5.5 hour drive home, jerry-rigged lights and all.

The inside had already been partially ripped out; the kind couple we bought Stella from had planned to turn her into a food truck but decided against it (lucky for us!). Prior to them buying her in July 2014, she sat for 20+ years in the backyard of the previous owner. Some of the windows have been broken out and she sat exposed to nature for many many years, which adds to the condition that she’s in. It’s going to be a LOT of work to bring her back, but the body of the Airstream is good. Just needs a little buffin’! Hopefully sooner rather than later we can get her into the shop and work on taking the body off the frame to see what kind of condition she’s in but for now, we’re just happy to be owners of an Airstream. Scratch that – we’re THRILLED. She’s a 1967 Airstream Overlander, 26′ Double. Ever since we brought her home 2 weeks ago, we’ve been on the forums, blogs, & Pinterest every night getting ideas, learning as much as we can, and getting ourselves ready for the adventure we have ahead of us! 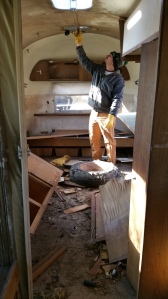 Buying this Airstream is the most spontaneous & exciting thing we’ve done to date and we are still in shock at how lucky we got. Here’s to chronicling the restoration of our diamond in the rough. We love her so much, our Stella the Dream Stream.